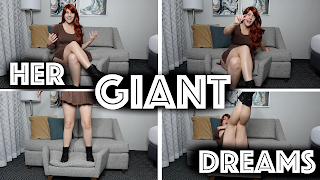 (You can find the video by the preview image above!)
I had a strange dream last night. I dreamt I was a huge Giant! Being this giant… Well, everyone wants to catch you! It isn’t fair. I saw WANTED posters and everything, I just knew they were after me.
Anyway, I was wearing this skimpy little thing. I’m all Giant with this skimpy dress. Giant legs. Giant feet. Giant hands. And a skimpy dress, ha!

Dark brown, light brown… A dress a bit like this one, really. But more, like… medieval feels. It suited me as a Giant perfectly. Though if you were underneath and between my Giant legs, oh boy!

I stepped right on top of things, all those tiny things. I didn’t really mean to, but… When you’re that big - a GIANT… You can’t really help it, of course. I’m walking around with my BIG feet and it’s just like…

Picture a Giant taller than any house. Any skyscraper. And really, those houses are teenie tiny. Really small, compared to me - HUGE. So I see these little houses seem alright, sturdy enough. And I sit on one. It just so happens it’s a pumpkin farm! I gobble so many up. A big, strong Giant needs the sustenance, ya know. And because of how giant I am, I wreck that whole pumpkin patch.

And now I’ve got all these hiccups from those little pumpkins. These hiccups make the ground rumble, imagine! Loud, booming hiccups! And I’m a thirsty giant to boot! A glass of water won’t do. Teenie, tiny glass of water? Nope. But in this countryside, I’ve got a great option - a well! I yank it up out of the ground.

Big Giant gulps. And well, why not indulge a bit? As this Giant, I get the inkling to roll up a fat cigar. But as I’m smoking this thing… A tiny little man appears! I was shocked! I’m this big Giant and I just know people wanna hunt me. All those little creatures want to capture me?! A giant?! So I try to crush this tiny man. He ended up getting the best of me in my awkward state as this Giant creature though.

After getting my hands all caught in this rope, he jumps down. Slides really, and he ties my massive legs up and…. BOOM! My big Giant body FALLS to the ground!

I suppose that tiny little man won, eh? But I’m a Giant, so… We’ll see… 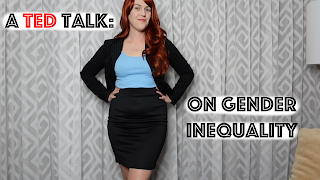 Ivy Starshyne
nearly 11 years in the adult industry, loving every weird bit of it